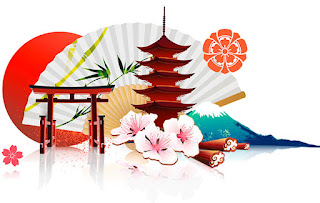 This will be be my first blog post of hopefully one of many more to come in the following days, weeks and years.

Today I thought I would write about a particular place in the world of which I am a really big fan..... or DAI-OUEN if you want to Japanese 'romanized' and phonetically correct English version . DAI-OUEN (pronounced 'die-owen') means 'big fan' or 'mad supporter' in Japanese - and whilst this may not be the exact translation I am looking for, nonetheless I think I get my point across. I love Japan!!

Now, I'm 110% sure that I'm not the only person out there with some sort of fascination for this small but also very prosperous and astonishingly unique country. I mean really, who wouldn't want to visit a nation where even something as unappealing as McDonald's can overshadow your local gourmet burger bar back home - in quality AND freshness ("shame on you Australia!"- finger pointing allowed). Or maybe it could be because of the 'verbal' red carpet that's 'pulled out' each and  EVERY time you step into a restaurant, department store or even a convenience store in Japan. A call of "IRASHAI-MASE!!" (welcome valued customer) repeatedly echoes throughout any one of these businesses as you the unassuming customer seamlessly meanders through the front door.

Well guess what! Now as a fully climatized 'Aussie' (Australian)  I can think of the many, many times when this kind of customer service NEVER (yep that's right) NEVER eventuated in my own country. I mean to be honest, my friends are often complaining about the lack of eye contact at the chemist, lazy body language at the pub or just the general lackadaisical attitude from staff when they are being served. But this really comes as no surprise. Conversely, the Japanese for centuries have carried respect, honour and a heap of pride within their culture and even within their language.  Basically the level of politeness, care and pride exhumes you as an honoured guest in Japan everywhere you go even in today's time-poor society.

In my eyes particularly, it really is quite amazing just how proper a society can function and present itself to the foreign visitor so eloquently. Japan does just this. However, just as Australians can come across quite friendly but can also be very lazy, there are also many peculiar and dark secrets that lie underneath Japan's seemingly perfect functioning facade. As they say - "never judge a book by its cover", and this really is the perfect analogy for the Japanese society.

So a bit of background here .......... I have been to Japan at least 6 times in the recent past already (from about 2002 - 2015) and I'm only 32. I have even had a few Japanese girlfriends and partners along the way who have also helped to establish a more deeper meaning of what it means to be a young Japanese 20-30 something living in Japan (and living away from their country too). Additionally I have lived and studied in Japan for nearly half a year in Nagoya and Osaka city, so I too have had a lot of first hand insights into the land of the rising sun. The main vibe and feeling I received from my peers, international students, is that the Japanese have such a notable fascination with the west - in particular American western culture. Considering WW2, the Hiroshima and Nagasaki bombing and the fact that American English is taught in Japan today, this explains a lot of the type of western (American) influence on Japan in the last 60-70 years. But it's not just their fascination with the west that struck me. It was mainly the fact that, when talking to many of the young Japanese and young foreigners like me living in Japan, I got a strong general consensus. Ready.....?? Here it is...... The Japanese almost hated their service culture and strict rigidity they had to portray whilst at their place of work.

For example, my ex partner (Japanese) of nearly 5 years often said to me that there was so much more freedom of speech and freedom of behaviour in Australia, especially at work. She of course missed Japan too for its quality of customer service, food and efficient public transport. But the main theme to her thoughts on work in Japan was that things were just too strict. This was things such as the level of politeness that she had to display when working her job as a sales assistant in a menswear store.  She always thought that this part of Japanese society was a requirement but also so 'fake'.  All of this internal pressure to please others and work hard for the company has even led students, office workers and business leaders to take there lives.

I remember studying in 2008 in Nagoya at an international university. Undertaking a course called 'Japanese business' I specifically recall learning about the high suicide rate in Japan. This was largely due to the high demands, expectations and pressures (society almost expected) that one felt as a Japanese student, businessman or regular employee to succeed in business, school and/or exams etc. In particular, was a pact that many businessmen in Japan often took and that was to go to the base of Mt Fuji and commit suicide together. This place is well known in Japanese as AOKI HARUKI or 'suicide forest' to most English speakers. Basically this is a large forest that is notorious for hangings from the many trees of businessmen who've wanted to take their lives. All this because of the extreme pressure that they have put themselves under because of these societal 'norms' of the Japanese to work hard, be polite and respect, respect, respect.

Anyhow, rather than ending on a murky note - let's just not ok!!! It's just that I'm actually a very positive person!! haha..... I will briefly introduce you to my next topic about my insight into Japan. The next blog post - hopefully completed this week or next - will be about my personal time in Japan and how I've also had my ups and downs. Not to the above extreme.....thank god for that!! :) But yes, you do not know culture shock in my opinion until you have lived in Japan.  Those Japanese are definitely quite different to us Aussies at least. So the next topic shall include some funny, interesting and at times, not so happy stories. But be ready to be entertained.......!

So....until my next blog come's along.....let me know your thoughts and comments. It's the first time blogging on Blogger for me so I assume you the reader can leave comments and opinions??

Cheers from Adelaide, Australia (the land of OZ)

ARIGATOU (thank you) for reading and JYA, MATA-NE (until next time).....